As many people are aware, the best performance can be achieved from MySQL Cluster by using the native (C++) NDB API (rather than using SQL via a MySQL Server). What’s less well known is that you can improve the performance of your NDB-API enabled application even further by ‘batching’. This article attempts to explain why batching helps and how to do it.

What is batching and why does it help?

NDB API accessing data from the Cluster without batching

By batching together multiple operations, all of the requests can be sent in one message and all of the replies received in another – thus reducing the number of messages and hence the latency and CPU time consumed.

How to use batching with the MySQL Cluster NDB API 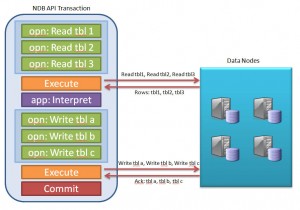 The principle is that you batch together as many operations as you can, execute them together and then interpret the results. After interpretting the results, the application may then decide to send in another batch of operations.

An NDB API transaction consists of one or more operations where each operation (currently) acts on a single table and could be a simple primary key read or write or a complex table scan.

The following code sample shows how this can be implemented in practice (note that the application logic and all error handling has been ommited).