MySQL Cluster is designed to be a High Availability, Fault Tolerant database where no single failure results in any loss of service.

This is however dependent on how the user chooses to architect the configuration – in terms of which nodes are placed on which physical hosts, and which physical resources each physical host is dependent on (for example if the two blades containing the data nodes making up a particular node group are cooled by the same fan then the failure of that fan could result in the loss of the whole database).

Of course, there’s always the possibility of an entire data center being lost due to earthquake, sabotage etc. and so for a fully available system, you should consider using asynchronous replication to a geographically remote Cluster.

Fig 1. illustrates a typical small configuration with one or more data nodes from different node groups being stored on two different physical hosts and a management node on an independent machines (probably co-located with other applications as its resource requirements are minimal. If any single node (process) or physical host is lost then service can continue.

The management node (ndb_mgmd process) is required when adding nodes to the cluster – either when it was initially configured or when a node has been lost and restarted.

A heart-beat protocol is used between the data nodes in order to identify when a node has been lost. In many cases, the community of surviving data nodes can reconfigure themselves but in some cases they need help from the management node – much of this article focuses on how to identify these cases so that you can decide what level of redundancy is required for the management node.

Goals of the algorithm

The algorithm used by MySQL Cluster has 2 priorities (in order):

Split brain would occur if 2 data nodes within a node group lost contact with each other and independently decided that they should be master for the fragments controlled by their node group. This could lead to them independently applying conflicting changes to the data – making it very hard to recover the database (which would include undoing the changes that the application believes to have been safely committed). Note that a particular node doesn’t know whether its peer(s) has crashed or if it has just lost its connection to it. If the algorithm is not confident of avoiding a split brain situation then all of the data nodes are shut down – obviously that isn’t an ideal result and so it’s important to understand how to configure your cluster so that doesn’t happen.

If all of the data nodes making up a node group are lost then the cluster shuts down.

When data nodes lose contact with each other (could be failure of a network connection, process or host) then all of the data nodes that can still contact each other form a new community. Each community must decide whether its data nodes should stay up or shut down:

In this way, at most one community of data nodes will survive and there is no chance of split brain.

Note that the management node consumes very little resource and so can be co-located with other functions/applications but as you’ll see from the examples, you would normally avoid running it on the same host as a data node. 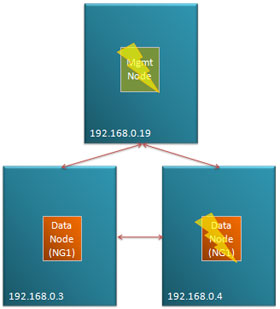 Fig 2. Loss of management node followed by data node in a simple Cluster

The surviving data node forms a community of 1. As it can’t know whether the other data node from NG1 is still viable and it can’t contact the arbitrator (the management node) it must shut itself down and so service is lost.

Note that the 2 nodes could be lost instantaneously or the management node might be lost first followed some time later by a data node.

To provide a truly HA solution there are 2 steps:

Example 2: Half of data nodes isolated but management node available

Fig 3. Half of data nodes lost

Example 3: Half of data nodes isolated and management node lost

The scenario shown in Fig 4. builds upon Example 2 but in the case, the management node is lost before one of the data node hosts loses its connection to the other.

In this case, both communities defer to the management node but as that has been lost they both shut themselves down and service is lost.

Refer to Example 1 to see what steps could be taken to increase the tolerance to multiple failures. 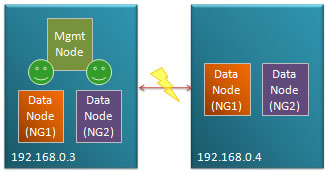 Fig. 4 shows a common, apparent short-cut that people may take, with just 2 hosts available hosting the management node of the same machine as some of the data nodes. In this example, the connection between the 2 hosts is lost. As each community is viable they each attempt to contact the arbitrator – the data nodes on 192.168.0.3 are allowed to stay up while those on 192.168.0.4 shut down as they can’t contact the management node.

However this configuration is inherently unsafe, if 192.168.0.3 failed then there would be a complete loss of service as the data nodes on 192.168.0.4 would form a viable community but be unable to confirm that they represent the only viable community.

It would be tempting to make this more robust by running a second management node on 192.168.0.4 – in that case, when each host becomes isolated from the other, the data nodes local to the management node that’s the current arbitrator will stay up however if the entire host on which the active arbitrator failed then you would again lose service. The management node must be run on a 3rd host for a fault-tolerant solution.

Fig 6. shows a configuration running the management node on the same host as some of the data nodes does provide a robust solution.

Example 6: Loss of all data nodes in a node group

Fig 7. All data nodes in a node-group lost

Fig 7. illustrates the case where there are multiple data node failures such that all of the data nodes making up a node group are lost. In this scenario, the cluster has to shut down as that node group is no longer viable and the cluster would no longer be able to provide access to all data. 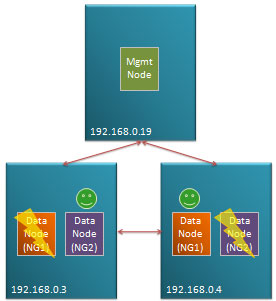 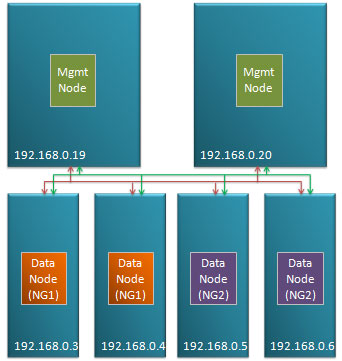