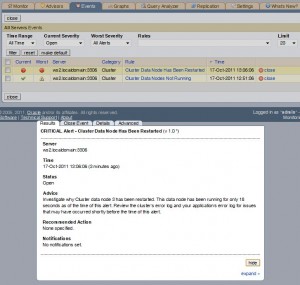 About 11 months ago I described the MySQL Cluster functionality that was added to MySQL Enterprise Monitor 2.3; this new post is intended to just bring this up to date – briefly describing the new graph and advisors which have been added since then (up to and including MEM 2.3.7).

Cluster Data Node Has Been Restarted

This new alert flags when a data node has been restarted (by default it alerts on any data node that has started in the last 10 minutes but you can change that interval if you wish). If you manually perform a restart (e.g. as part of a rolling upgrade) then you can safely ignore this alert (or you may even want to temporarily unschedule it first). However if the restart was spontaneous then this can be an early warning for you to take a look at the error logs and address any issues before the situation worsens.

The Disk Page Buffer is a cache on each data node which is used when using disk-based tables. Like any cache, the higher the hit rate the better the performance. Tuning the size of this cache can have a significant effect on your system – the new graph helps you see the results of your changes and the alert warns you when the ration falls below an acceptable level (this could happen for example temporarily after a data node restart or permanently when the active data set grows).

The alert is first raised (info level) when the hit rate falls bellow 97%, the warning level is raised at 90% and the critical level at 80%. Again, you can alter any of these thresholds.

The new graph simply displays how the hit rate varies over time so that you can spot trends.

As a reminder you can get more information on the original set of alerts and graphs here.

Join this session to learn about the latest enhancements to the MySQL Cluster database, enabling even more of the latest generation of web, telecoms and embedded applications to take advantage of high write scalability, SQL and NoSQL interfaces and 99.999% availability.

The 2nd Development Milestone Release of MySQL Cluster 7.2.1 was announced at Oracle OpenWorld 2011. This release is now available for download and evaluation under the GPL license. This session will help to get you started with this latest release.

For those people that weren’t able to attend the MySQL Cluster demo or sessions at this year’s Oracle Open World (or even for those that did) and would like copies of the material, links are provided here.