This is the second in a series of blog posts examining the technologies that are driving the development of modern web and mobile applications.

The remainder of the series is focussed on working through the end to end steps of building a real (albeit simple) application – MongoPop.

This post demonstrates how to use MongoDB from Node.js.

MongoDB provides the persistence for your application data.

MongoDB is an open-source, document database designed with both scalability and developer agility in mind. MongoDB bridges the gap between key-value stores, which are fast and scalable, and relational databases, which have rich functionality. Instead of storing data in rows and columns as one would with a relational database, MongoDB stores JSON documents in collections with dynamic schemas.

MongoDB’s document data model makes it easy for you to store and combine data of any structure, without giving up sophisticated validation rules, flexible data access, and rich indexing functionality. You can dynamically modify the schema without downtime – vital for rapidly evolving applications.

It can be scaled within and across geographically distributed data centers, providing high levels of availability and scalability. As your deployments grow, the database scales easily with no downtime, and without changing your application.

MongoDB Atlas is a database as a service for MongoDB, letting you focus on apps instead of ops. With MongoDB Atlas, you only pay for what you use with a convenient hourly billing model. With the click of a button, you can scale up and down when you need to, with no downtime, full security, and high performance.

Our application will access MongoDB via the JavaScript/Node.js driver which we install as a Node.js module.

Node.js is a JavaScript runtime environment that runs your back-end application (via Express).

Node.js is based on Google’s V8 JavaScript engine which is used in the Chrome browser. It also includes a number of modules that provides features essential for implementing web applications – including networking protocols such as HTTP. Third party modules, including the MongoDB driver, can be installed, using the npm tool.

Node.js is an asynchronous, event-driven engine where the application makes a request and then continues working on other useful tasks rather than stalling while it waits for a response. On completion of the requested task, the application is informed of the results via a callback (or a promise or Observable. This enables large numbers of operations to be performed in parallel – essential when scaling applications. MongoDB was also designed to be used asynchronously and so it works well with Node.js applications.

MongoPop is a web application that can be used to help you test out and exercise MongoDB. After supplying it with the database connection information (e.g., as displayed in the MongoDB Atlas GUI), MongoPop provides these features:

Rather than installing and running MongoDB ourselves, it’s simpler to spin one up in MongoDB Atlas:

To get the application code, either download and extract the zip file or use git to clone the Mongopop repo:

If you don’t have Node.js installed then that needs to be done before building the application; it can be downloaded from nodejs.org .

A file called package.json is used to control npm (the package manager for Node.js); here is the final version for the application:

The scripts section defines a set of shortcuts that can be executed using npm run <script-name>. For example npm run debug runs the Typescript transpiler (tsc) and then the Express framework in debug mode. start is a special case and can be executed with npm start.

Before running any of the software, the Node.js dependencies must be installed (into the node_modules directory):

Note the list of dependencies in package.json – these are the Node.js packages that will be installed by npm install. After those modules have been installed, npm will invoke the postinstall script (that will be covered in Part 4 of this series). If you later realise that an extra package is needed then you can install it and add it to the dependency list with a single command. For example, if the MongoDB Node.js driver hadn’t already been included then it could be added with npm install --save mongodb – this would install the package as well as saving the dependency in package.json.

The application can then be run:

Once running, browse to http://localhost:3000/ to try out the application. When browsing to that location, you should be rewarded with the IP address of the server where Node.js is running (useful when running the client application remotely) – this IP address must be added to the IP Whitelist in the Security tab of the MongoDB Atlas GUI. Fill in the password for the MongoDB user you created in MongoDB Atlas and you’re ready to go. Note that you should get your own URL, for your own data set using the Mockaroo service – allowing you to customise the format and contents of the sample data (and avoid exceeding the Mockaroo quota limit for the example URL).

What are all of these files?

The rest of the files and directories can be ignored for now – they will be covered in later posts in this series. 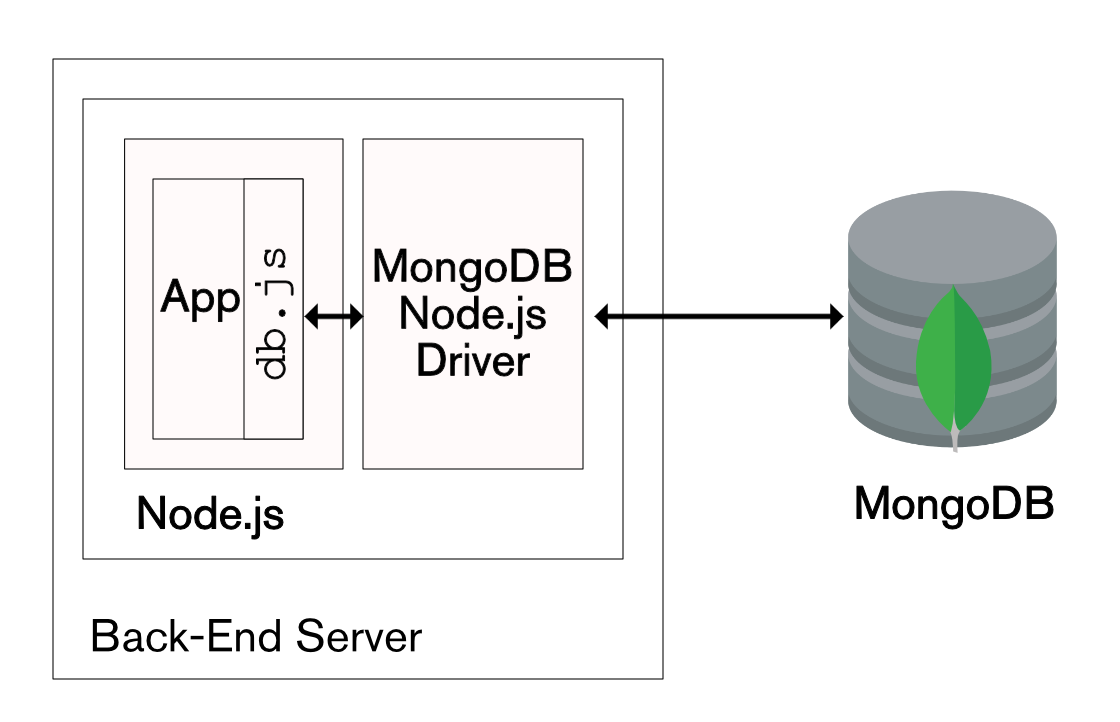 The MongoDB Node.js Driver provides a JavaScript API which implements the network protocol required to read and write from a local or remote MongoDB database. If using a replica set (and you should for production) then the driver also decides which MongoDB instance to send each request to. If using a sharded MongoDB cluster then the driver connects to the mongos query router, which in turn picks the correct shard(s) to direct each request to.

We implement a shallow wrapper for the driver (javascripts/db.js) which simplifies the database interface that the application code (coming in the next post) is exposed to.

Its only dependency is the MongoDB Node.js driver:

The prototype has a single property – db which stores the database connection; it’s initialised to null in the constructor:

The MongoDB driver is asynchronous (the function returns without waiting for the requested operation to complete); there are two different patterns for handling this:

This application uses the promise-based approach. This is the general pattern when using promises:

The methods of the DB object prototype we create are also asynchronous and also return promises (rather than accepting callback functions). This is the general pattern for returning and then subsequently satisfying promises:

db.js represents a thin wrapper on top of the MongoDB driver library and so (with the background on promises under our belt) the code should be intuitive. The basic interaction model from the application should be:

Here is the method from db.js to open the database connection:

One of the simplest methods that can be called to use this new connection is to count the number of documents in a collection:

Note that the collection method on the database connection doesn’t support promises and so a callback function is provided instead.

And after counting the documents; the application should close the connection with this method:

Note that then also returns a promise (which is, in turn, resolved or rejected). The returned promise could be created in one of 4 ways:

In this way, promises can be chained to perform a sequence of events (where each step waits on the resolution of the promise from the previous one). Using those 3 methods from db.js, it’s now possible to implement a very simple application function:

That function isn’t part of the final application – the actual code will be covered in the next post – but jump ahead and look at routes/pop.js if your curious).

It’s worth looking at the sampleCollection prototype method as it uses a database /cursor/ . This method fetches a “random” selection of documents – useful when you want to understand the typical format of the collection’s documents:

Note that [collection.aggregate](http://mongodb.github.io/ node-mongodb-native/2.0/api/Collection.html#aggregate “MongoDB aggregation from JavaScript Node.js driver”) doesn’t actually access the database – that’s why it’s a synchronous call (no need for a promise or a callback) – instead, it returns a cursor. The cursor is then used to read the data from MongoDB by invoking its toArray method. As toArray reads from the database, it can take some time and so it is an asynchronous call, and a callback function must be provided (toArray doesn’t support promises).

The rest of these database methods can be viewed in db.js but they follow a similar pattern. The Node.js MongoDB Driver API documentation explains each of the methods and their parameters.

Summary & what’s next in the series

This post built upon the first, introductory, post by stepping through how to install and use Node.js and the MongoDB Node.js driver. This is our first step in building a modern, reactive application using the MEAN and MERN stacks.

The blog went on to describe the implementation of a thin layer that’s been created to sit between the application code and the MongoDB driver. The layer is there to provide a simpler, more limited API to make application development easier. In other applications, the layer could add extra value such as making semantic data checks.

The next part of this series adds the Express framework and uses it to implement a REST API to allow clients to make requests of the MongoDB database. That REST API will subsequently be used by the client application (using Angular in Part 4 or React in Part 5).

Continue following this blog series to step through building the remaining stages of the MongoPop application:

A simpler way to build your app – MongoDB Stitch, Backend as a Service

MongoDB Stitch is a backend as a service (BaaS), giving developers a REST-like API to MongoDB, and composability with other services, backed by a robust system for configuring fine-grained data access controls. Stitch provides native SDKs for JavaScript, iOS, and Android.

MongoDB Stitch allows you to compose multi-stage pipelines that orchestrate data across multiple services; where each stage acts on the data before passing its results on to the next.

Unlike other BaaS offerings, MongoDB Stitch works with your existing as well as new MongoDB clusters, giving you access to the full power and scalability of the database. By defining appropriate data access rules, you can selectively expose your existing MongoDB data to other applications through MongoDB Stitch’s API.

If you’d like to try it out, step through building an application with MongoDB Stitch.