Earlier this week, I presented a webinar on MySQL High Availability options for MySQL – what they are and how to choose the most appropriate one for your application.

The replay of this webinar can now be viewed here or if you just want to look at the charts then scroll down. At the end of this post, I include a summary of the Q&A from the webinar.

How important is your data? Can you afford to lose it? What about just some of it? What would be the impact if you couldn’t access it for a minute, an hour, a day or a week?

Different applications can have very different requirements for High Availability. Some need 100% data reliability with 24x7x365 read & write access while many others are better served by a simpler approach with more modest HA ambitions.

MySQL has an array of High Availability solutions ranging from simple backups, through replication and shared storage clustering – all the way up to 99.999% available shared nothing, geographically replicated clusters. These solutions also have different ‘bonus’ features such as full InnoDB compatibility, in-memory real-time performance, linear scalability and SQL & NoSQL APIs.

The purpose of this webinar is to help you decide where your application sits in terms of HA requirements and discover which of the MySQL solutions best fit the bill. It will also cover what you need outside of the database to ensure High Availability – state of the art monitoring being a prime example.

On 17th October I’ll be running a hands-on workshop on the various technologies available to provide High Availability using MySQL. The workshop is being held on 17th October (the day before the All Your Base conference) in Oxford (UK). The cost is £250 + VAT and you can register here.

This workshop provides an introduction to what High Availability (HA) is; what technology options are available to achieve it with MySQL and how to actually implement your own HA solutions. The session will be a mixture of presentations, demonstrations and (most importantly) hands-on tutorials.

We’ll start with an overview of High Availability – in general and in the context of MySQL and then a survey of the technologies to choose from:

There will be deep-dives on MySQL Replication and MySQL Cluster and this is where the hands-on parts of the workshop will focus:

The plan is to get everyone up and running with multiple VMs on their laptops so that they can experiment and test with MySQL Cluster and MySQL Replication over multiple (virtual) hosts. As a stretch, we’ll try creating a Cluster running over everyone’s machine at the same time – though that might be stretching the logisitics! I’ve got a supply of 30 USB sticks and hope to have 2-3 unique virtual appliances on each – what could go wrong?

Oracle has announced that it now provides support for DRBD with MySQL – this means a single point of support for the entire MySQL/DRBD/Pacemaker/Corosync/Linux stack! As part of this, we’ve released a new white paper which steps you through everything you need to do to configure this High Availability stack. The white paper provides a step-by-step guide to installing, configuring, provisioning and testing the complete MySQL and DRBD stack, including:

DRBD is an extremely popular way of adding a layer of High Availability to a MySQL deployment – especially when the 99.999% availability levels delivered by MySQL Cluster isn’t needed. It can be implemented without the shared storage required for typical clustering solutions (not required by MySQL Cluster either) and so it can be a very cost effective solution for Linux environments.

Introduction to MySQL on DRBD/Pacemaker/Corosync/Oracle Linux 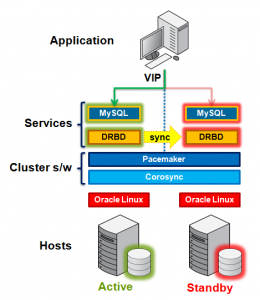 Figure 1 illustrates the stack that can be used to deliver a level of High Availability for the MySQL service.

At the lowest level, 2 hosts are required in order to provide physical redundancy; if using a virtual environment, those 2 hosts should be on different physical machines. It is an important feature that no shared storage is required. At any point in time, the services will be active on one host and in standby mode on the other.

Pacemaker and Corosync combine to provide the clustering layer that sits between the services and the underlying hosts and operating systems. Pacemaker is responsible for starting and stopping services – ensuring that they’re running on exactly one host, delivering high availability and avoiding data corruption. Corosync provides the underlying messaging infrastructure between the nodes that enables Pacemaker to do its job; it also handles the nodes membership within the cluster and informs Pacemaker of any changes.

The core Pacemaker process does not have built in knowledge of the specific services to be managed; instead agents are used which provide a wrapper for the service-specific actions. For example, in this solution we use agents for Virtual IP Addresses, MySQL and DRBD – these are all existing agents and come packaged with Pacemaker. This white paper will demonstrate how to configure Pacemaker to use these agents to provide a High Availability stack for MySQL.

The essential services managed by Pacemaker in this configuration are DRBD, MySQL and the Virtual IP Address that applications use to connect to the active MySQL service.

DRBD synchronizes data at the block device (typically a spinning or solid state disk) – transparent to the application, database and even the file system. DRBD requires the use of a journaling file system such as ext3 or ext4. For this solution it acts in an active-standby mode – this means that at any point in time the directories being managed by DRBD are accessible for reads and writes on exactly one of the two hosts and inaccessible (even for reads) on the other. Any changes made on the active host are synchronously replicated to the standby host by DRBD.

Setting up MySQL with DRBD/Pacemaker/Corosync/Oracle Linux 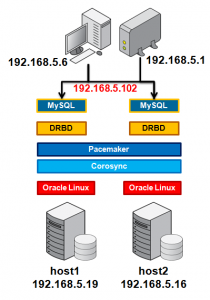 A single Virtual IP (VIP) is shown in the figure (192.168.5.102) and this is the address that the application will connect to when accessing the MySQL database. Pacemaker will be responsible for migrating this between the 2 physical IP addresses.

One of the final steps in configuring Pacemaker is to add network connectivity monitoring in order to attempt to have an isolated host stop its MySQL service to avoid a “split-brain” scenario. This is achieved by having each host ping an external (not one part of the cluster) IP addresses – in this case the network router (192.168.5.1).

Figure 3 shows where the MySQL files will be stored. The MySQL binaries as well as the socket (mysql.sock) and process-id (mysql.pid) files are stored in a regular partition – independent on each host (under /var/lib/mysql/). The MySQL Server configuration file (my.cnf) and the database files (data/*) are stored in a DRBD controlled file system that at any point in time is only available on one of the two hosts – this file system is controlled by DRBD and mounted under /var/lib/mysql_drbd/.

The white paper steps through setting all of this up as well as the resources in Pacemaker/Corosync that allow detection of a problem and the failover of the storage (DRBD), database (MySQL) and the Virtual IP address used by the application to access the database – all in a coordinated way of course. As you’ll notice in Figure 4 this involves setting up quite a few entities and relationships – the paper goes through each one.